Caño Island, located 16 km northwest of the Osa Peninsula in southern Costa Rica, is considered one of the best snorkeling and diving sites in the country. The island is only 3km long and uninhabited, except for the resident ranger station. However, it is home to an abundant diversity of wildlife species – especially underwater. Its small, forested mountain standing 123 meters (403 feet) tall is ringed by white sandy beaches. The island’s waters are home to a diversity of corals, fishes, and other marine animals. The island and the three kilometers of surrounding ocean are designated as a no-take Biological Reserve, which acts as a refuge for fish that are targeted by anglers elsewhere. Designated diving sites are also limited within the protected area to preserve the corals.

In addition to colorful reef fish, you might observe
large schools of grunts, snappers, needlefish, jacks,
barracuda, and tuna swimming around Caño.

The reefs at Caño Island are biologically diverse, with at least 212 species of fish recorded. In addition to colorful reef fish, you might observe large schools of grunts, snappers, needlefish, jacks, barracuda, and tuna swimming around Caño. In addition, white-tipped reef sharks are a common sight, and you could be lucky enough to spot olive ridley sea turtles or manta rays. It is also common to see dolphins on the boat ride to the island, and occasionally humpback whales that come to Central America to give birth and nurse their calves. Humpback whales from the Southern Hemisphere visit the region from September to November, and those from the Northern Hemisphere visit from December to April. Tours to Caño Island leave early in the morning and usually last 6–8 hours. Getting to the island takes about 45 minutes from Casa Roja, although this can vary depending on ocean conditions. If you stay at Casa Roja, we will arrange your snorkel or scuba tour of Caño Island. 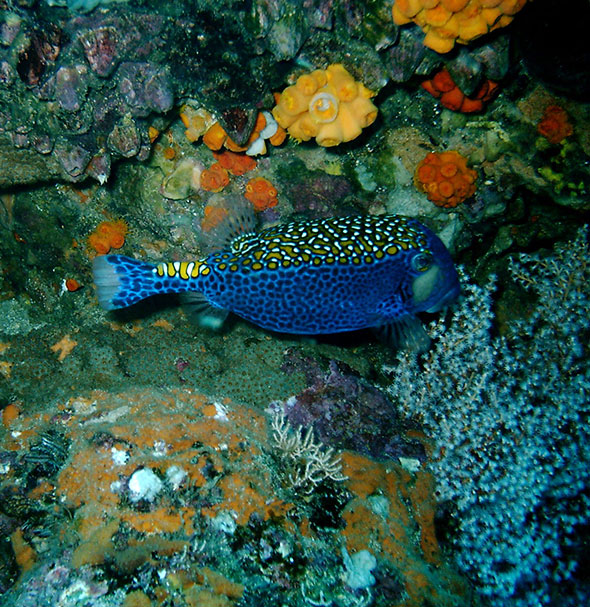 Above water, Caño’s Biological Reserve includes forests and hiking trails, and is treasured as a special archeological site that contains indigenous artifacts, including the mysterious Diquis stone spheres. It is thought that the island was used as an indigenous cemetery during pre-Columbian times. The name “Caño” comes from the colonial Spanish visitors, who observed abundant creeks that they called caños (meaning “spout” in Spanish). The island’s terrestrial wildlife is more limited than its marine life, but it is possible to observe pacas, peccaries, tree frogs, snakes, lizards, and birds.

The Reserve is managed by the Costa Rican government, which has a ranger station with a restroom on the island. The tree-lined beach near the station offers both sunny and shady spots for relaxing. The island is a popular destination for tourists, so anticipate other snorkelers during your visit, especially during the high season. Caño can experience a lot of rainfall in some months and be hot during others. The driest months are December to April, which are also the best times for snorkeling visibility and whale watching.