Find the right season
to plan your perfect stay

Costa Rica has pronounced rainy and drier seasons, and the time of year that you visit can affect everything from the weather to the wildlife to which fish are biting. The dry season coincides with the busy tourist months, but there is still plenty to do and see in the wetter months. Explore our calendars below to help you plan your visit around activities that might be in season, and learn what to expect!

This fishing calendar lists the best, great, and good times to catch certain species. Whether you are fishing in the river, nearshore, or offshore, you can decide when to target that prized catch. 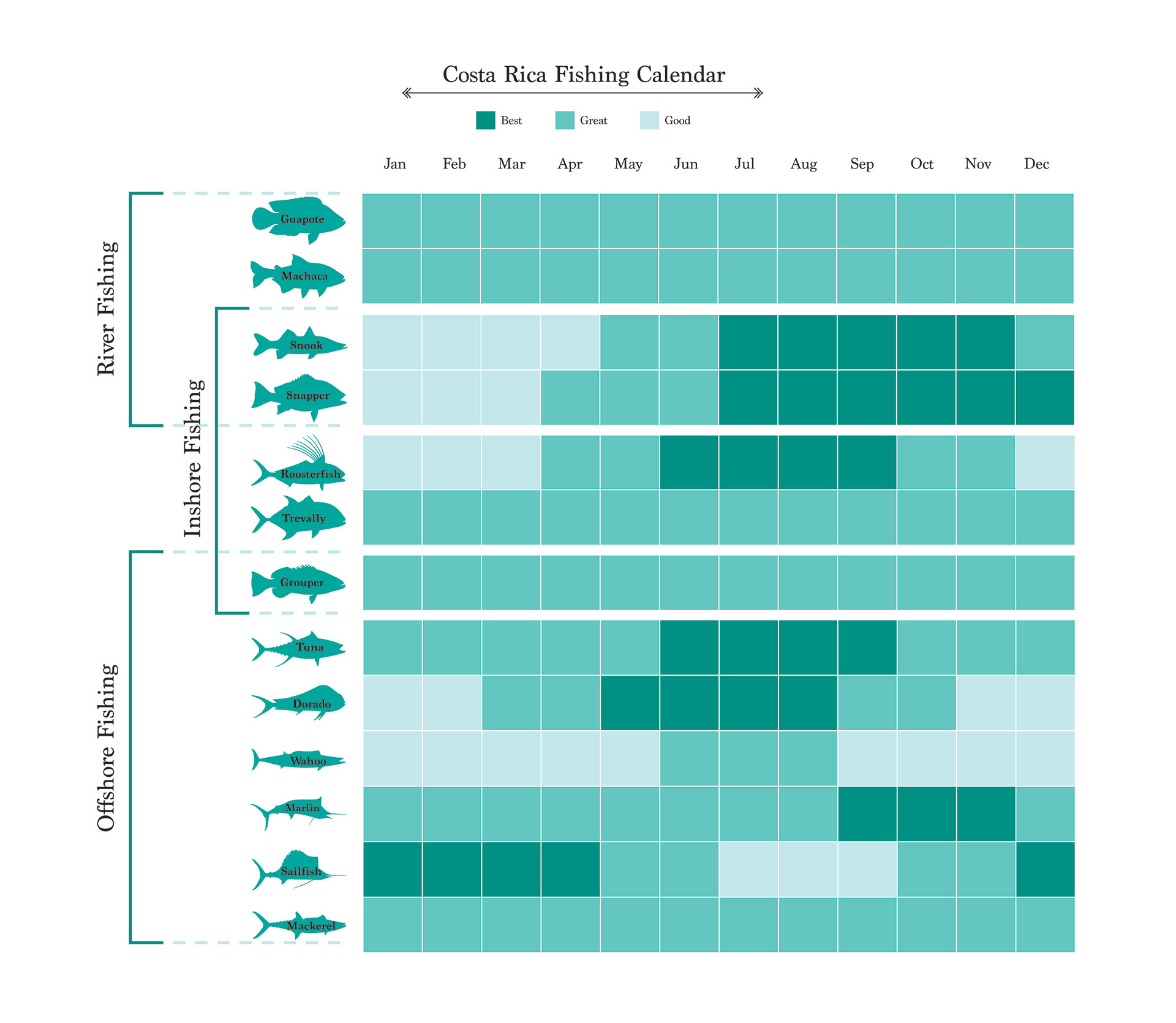 This calendar shows the best times to participate in water-related activities in dark blue. The dry season is generally December–April, making for great sunbathing and swimming weather, and better visibility for snorkeling. Dolphins and whales can be spotted year-round off the coasts of the Osa Peninsula, depending on the species. Average ocean temperatures range from very warm during the dry season to a little chilly in September, which may require a short-sleeved wetsuit for snorkeling and surfing. 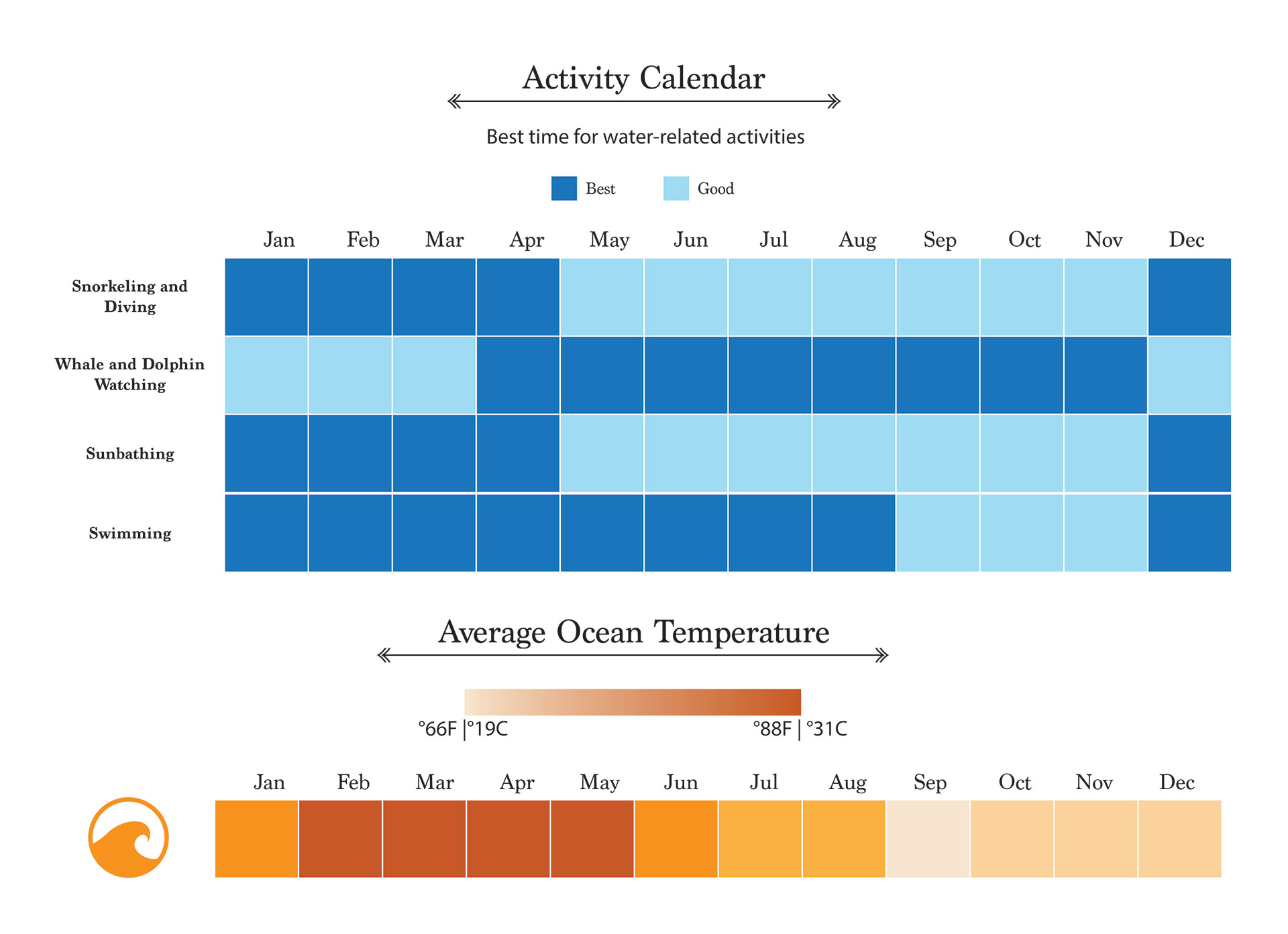 Rainfall in the Osa Peninsula is heavy through the months of May–November and is highest in October, when more than 20 inches of rain falls on average. The drier seasons also experience some rainfall as well, usually in the evenings, so pack accordingly. 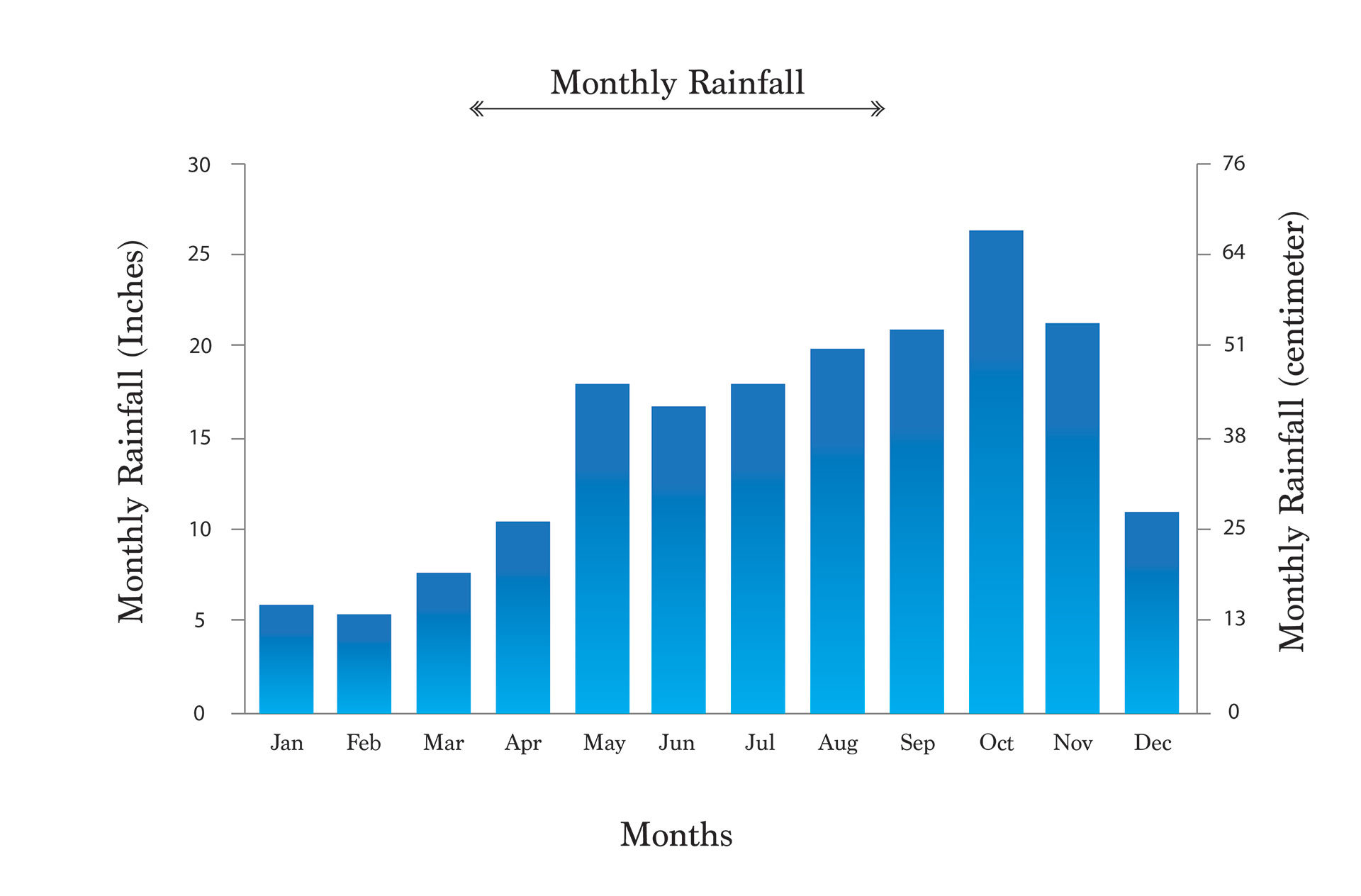 Average air temperatures peak in February, but stay above or close to 26°C (80°F) year-round. The coolest months are October–December, which is also when most rain falls. Humidity remains high from May–November and drops only slightly in other months, remaining above 50% on average. 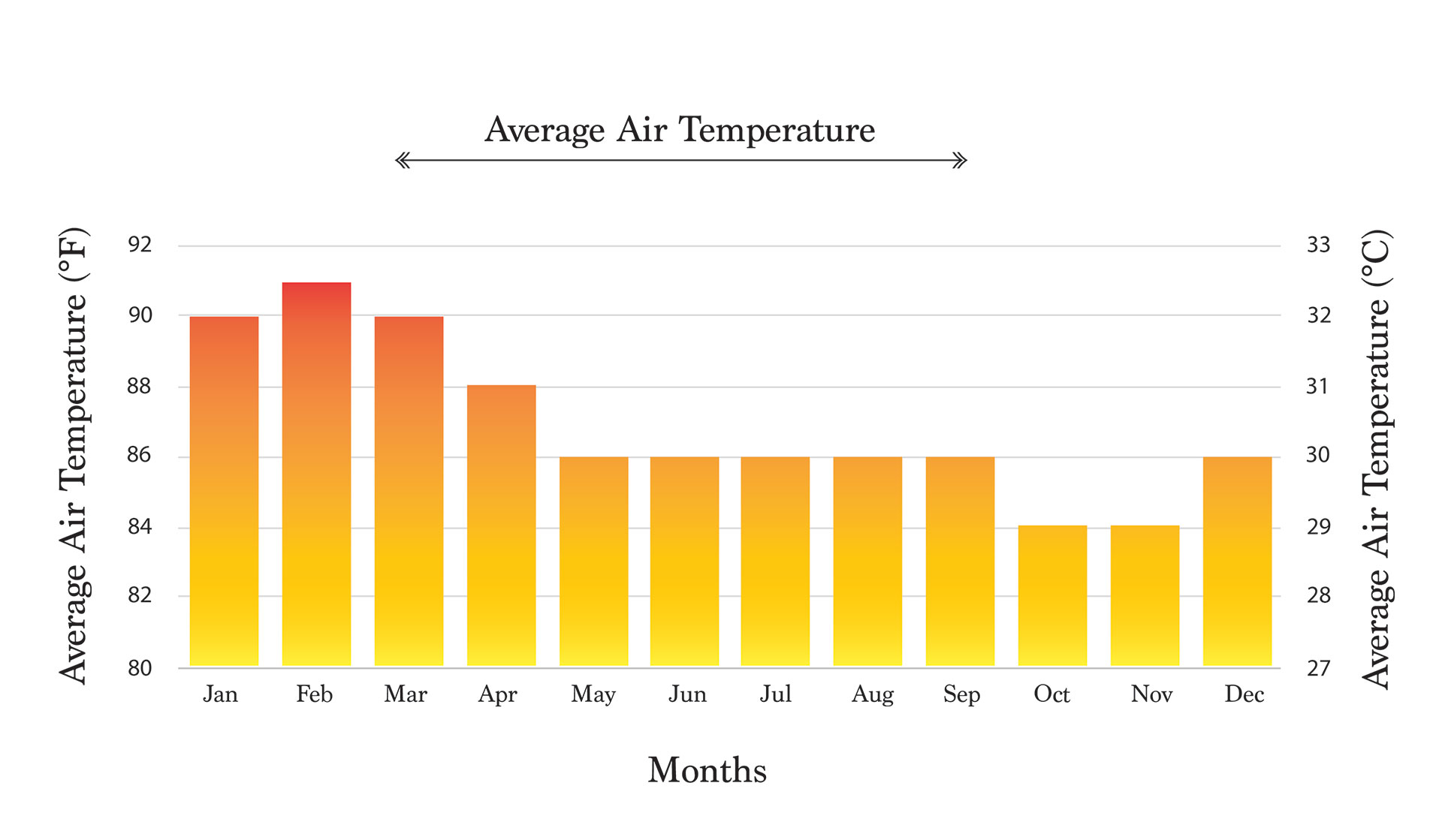 It rains at least every other day from May–November in the Osa Peninsula. In contrast, the dry season may receive as little as two full days of rain per month between December and April. 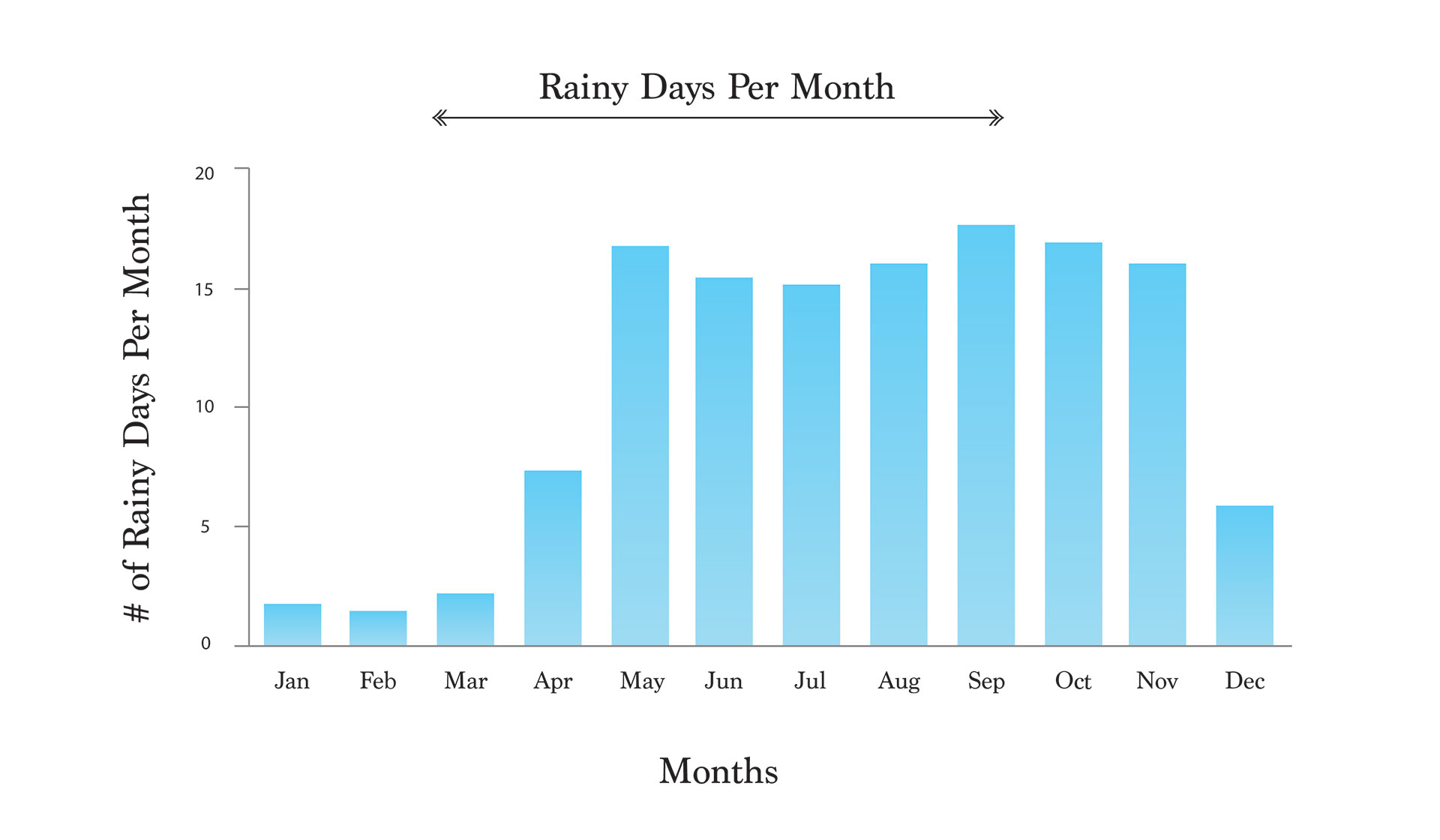 Popular travel times coincide with the dry season from December–April, with another spike from July–August, when most schools are on summer break in the northern hemisphere. Plan ahead and expect the need to book early for tours and hotels as well as higher prices during peak travel times.

The calendar below shows the best (dark green), good (mid green), and average (light green) times for viewing the nesting of different turtle species, as well as dolphin and whale migrations. Your best chances for seeing these animals is with an experienced local guide who can take you to locations where they are frequently seen. 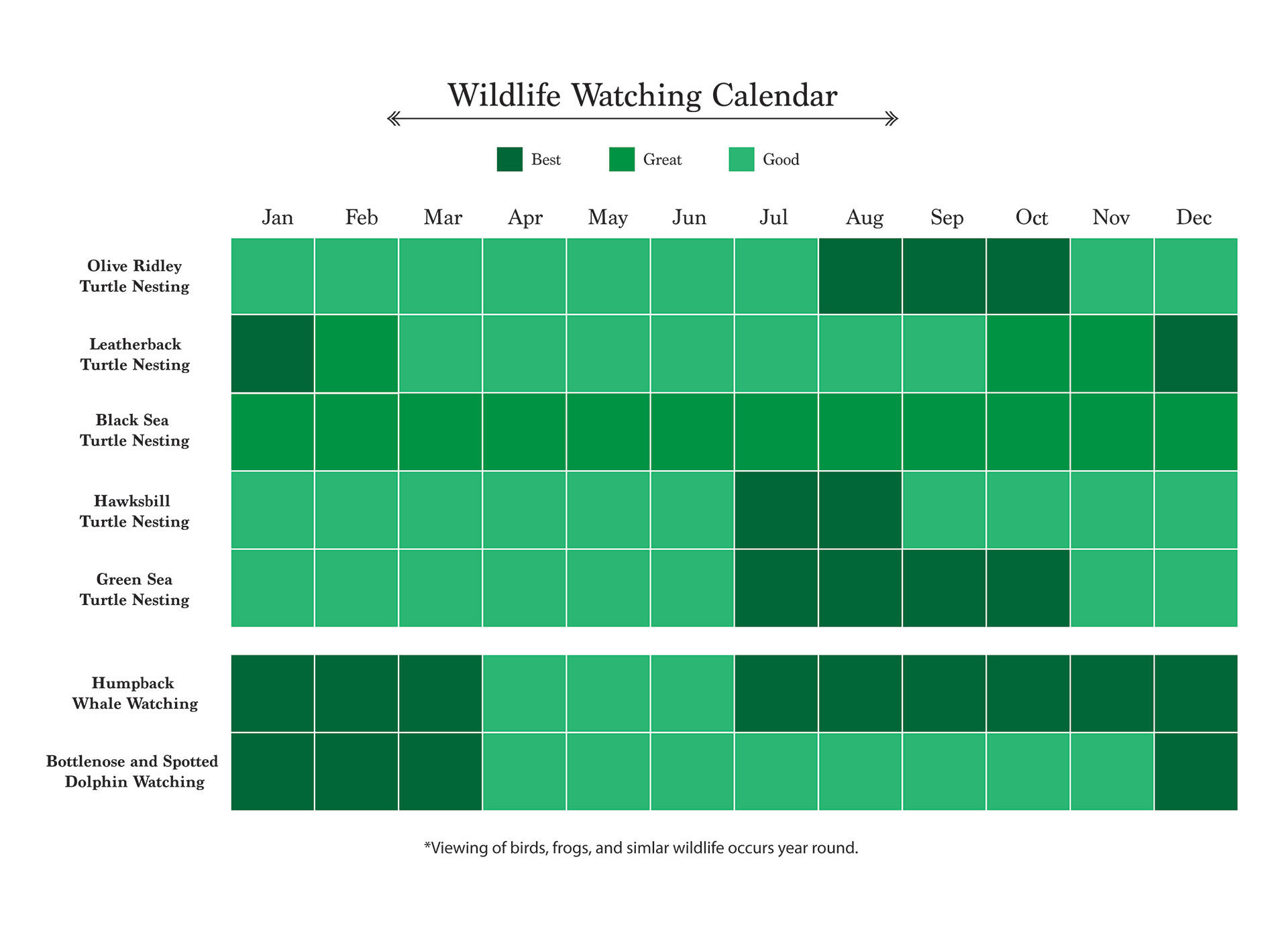